Champion of Champions 2017 is the exclusive tournament for the winners of the largest tournaments of the previous year. So all participants are guaranteed to be in a fairly good shape for the tournament, and the crowd and atmosphere is usually amazing at the Ricoh Arena on the outskirts of Coventry. Reining champion is the Wizard of Wishaw, former world no. 1 and multiple world snooker champion, John Higgins.

The tournament is played from November 6 to November 12, 2017. The 16 players are split into four groups, and each group complete their matches in one day, with two group semifinals (best of 7) in the afternoon and the group final in the evening (best of 11). The group winners go on to play the actual semifinals (best of 11) on Friday and Saturday evenings respectively, and the grand final (best of 19) is played on Sunday the 12th over two sessions.

How to get – and how much for – tickets? 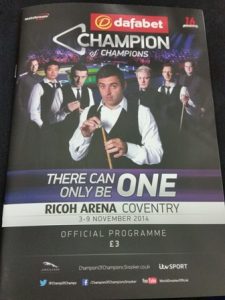 The box office opened in March 2017. All-day tickets for the group matches are available for £21/day, while tickets for the semifinals are £25/session. An all-day ticket for the final is £50, but be aware that a 10% administration fee is added to all purchases by the tickets agency.

Where to stay for the Champion of Champions 2017?

The Doubletree by Hilton at Ricoh Arena is located in the Ricoh Arena itself, and most players at the Champion of Champions 2017 will probably stay there as well (the webmaster of this site met Ronnie in the breakfast room, and Neil Robertson in the reception for check-out in 2014). Pitch view rooms are available, but these are of mixed quality, as some of them are also being used on match days as lounges etc. It may be worth it to go for a slightly more expensive Club or Executive room instead.

Approx. 1 km from the arena, next to the M6, is the decent Novotel Coventry. It is quite reasonable, but apart from the Ricoh, there is absolutely nothing of interest in the vicinity. There are a few good hotels in the Coventry city centre, which is however about 6km from Ricoh Arena.

If you want to stay in the city centre, you can take bus 4 or 5 from the Pool Meadow stop – the drive is about 25 minutes to the Arena Park/Tesco stop, from where there is a short walk to the arena. Or you can get a taxi for less than £10.

How to get to Coventry?

Birmingham Airport is very close to Coventry, and it has a large number of international flight connections. Bus 900 goes directly from the airport to Coventry every quarter of the hour during the daytime, and the drive is about 40 minutes. Trains are also available, which will get you to Coventry in less than 20 minutes from the Birmingham Intl. station. A taxi from Coventry train station to the Ricoh Arena is about £10, and the drive is between 10 and 20 minutes, depending on traffic.

Coventry also has decent train connections to Manchester Airport (a little over 2 hrs, change at Crewe) and from London Euston (1-1½ hrs on a direct train).