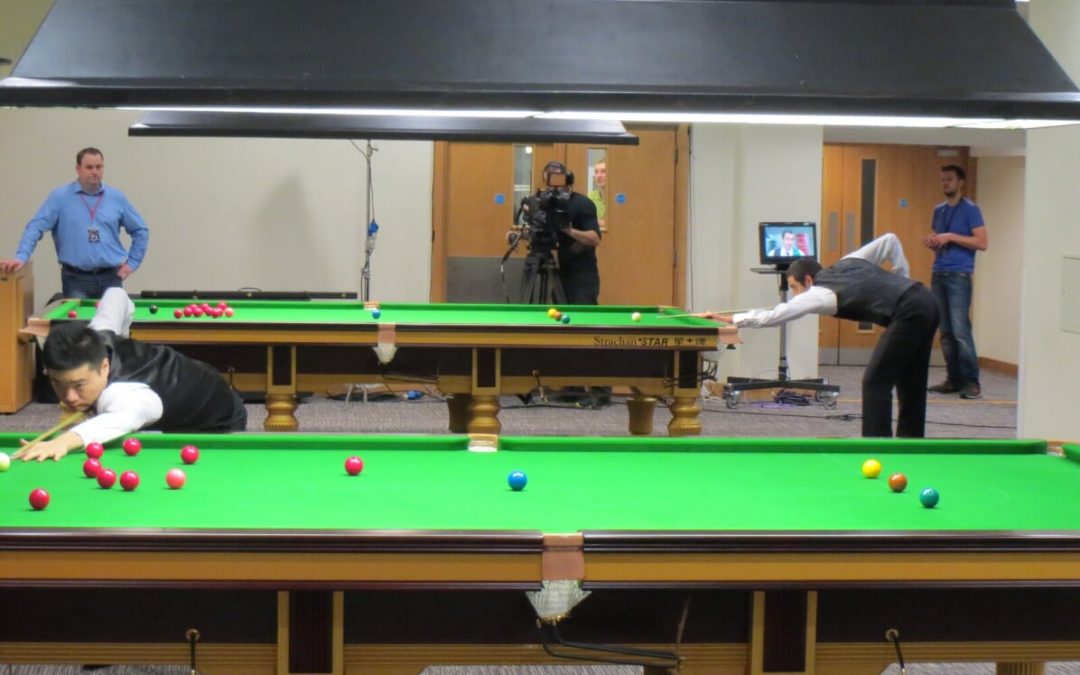 On November 8-9, 2014, the webmaster was in Coventry for the semifinals and final of the Champion of Champions 2014, the tournament where just 16 of the very best players on the professional tour participates. To qualify for the tournament, a player has to win one or more tournaments on a special list of the most important tournaments of the year. The webmaster tried out the VIP treatment for the semifinals, and also attended the final. Defending champion was Ronnie O’Sullivan who won the 2013 final against Stuart Bingham.

The tournament itself was played in Jaguar Hall, a part of Ricoh Arena which is a massive sports and entertainment complex, about 5 miles from the Coventry city centre near the motorway. On Friday night, the 7th of November, we flew in to nearby Birmingham Airport, about halfway between Birmingham and Coventry. We could have gone directly from there to Coventry, but as we wanted to have a glimpse of Birmingham as well, we stayed there for the first night.

On Saturday morning we continued on to Coventry, about 20 minutes from Birmingham in a filled regional train to London Euston. The tickets were just about £2 each, and were easily bought in machines on the station. From the Coventry rail station, which is just south of the city center, next to the ring road, we took a taxi to the Ricoh Arena (10-15 minutes, £10-12). We had booked a room in the hotel in the arena, De Vere at Ricoh Arena , for a one-night stay, but we could not check-in until after 3PM; it was no problem getting the reception to hold our luggage, though.

We had chosen to try a bit of luxury and therefore had bought VIP tickets for the semifinals (£120/person). The tickets gave access to the Tournament Lounge for 1½ hour before each session, and included a two course lunch and a two couse dinner, as well as the tournament programme and an ear-piece for live commentary during the matches. At 12PM we were seated at our table (which was reserved just for us), devouring a delicious green curry and a chicken dish respectively (this was the extent of the lunch selection). Next to us were two training tables and the lounge also had its own almost queue-free bar. Half an hour before the game was about to start, Ronnie O’Sullivan turned up, and we could watch him give a pre-match interview before he did a 15 minutes warm-up on one of the tables. Shortly after Ronnie had completed his interview, Ding Junhui arrived, and began warming up as well. It was a nice experience being so close to two such distinguished players.

A quarter to one we were asked to find our seats in the hall, which we did. The audience warm-up was done by Mark Johnston-Allen, a former semipro, who is now a journalist, pundit and MC at various snooker events (when Rob Walker is unavailable…). He told us a bit about the proceedings, when we would be live on ITV and how and when we should make some noise for the players and the viewers on TV.

At 1PM the transmission started, Jill Douglas gave the queue to Mark from the plexiglas TV-studio at the back of the stage, and Mark gave us the queue to start cheeering by saying “Thank you, Jill.” The players went on one by one, and took their places in the corners. We had front row seats for both semifinals, and so in the first were no more than 3 meters from Ronnie for most of the match. Across the table from us were two chinese youngsters who were visibly impressed to sit so close to their own idol Ding.

The match itself you can read about elsewhere; it was never really thrilling, as Ronnie was just too good for Ding on the day. There were some good frames among them, though, and Ding did OK for most of the match. It just is a mission impossible when you are up against “an unstoppable force” as 77 years old veteran commentator Clive Everton said in the live commentary. During mid-session we could go to the bar in the tournament lounge, thereby skipping the long queue in the ordinary bar area. And we could also have stayed in the lounge for a few frames, watching the game on a big-screen TV, if we wanted to sit or stand a bit more comfortably away from the crowd. We chose to go back to the hall, however, to really get the atmosphere.

After the match, Ding gave a few autographs to some of the many fans who quickly crowded the barrier. Ronnie hurried away, but then he had to prepare for the next day’s final.

I then went over to check in at the hotel reception. There was quite a queue, as we were not the only ones amongst the audience, who wanted to stay at De Vere. After about 20 minutes wait we got our room, an Executive Room with a view to the parking lot. This does not sound particularly charming, but the room was really quite good – very large, with a bath room (shower+WC), a kitchen and a lion foot bathtub in the living/sleeping room(!) which also featured a nice sofa arrangement.

At 6PM we had returned to the lounge for some pre-match dinner. Half an hour before the match Judd Trump arrived with his entourage, consisting of father, mother and (we think) older brother. Apparently they go with him to almost all tournament, and Clive Everton (during the match commentary) also paid tribute to the father, Steve Trump, as “the unsung hero”, who had driven young Judd thousands of miles to snooker tournaments across the country.

Shortly before we were to find our seats Neil Robertson turned up, and he also did an interview and potted a few balls before we left.

The match itself was a strange affair with many long and messy frames. Trump won deservedly, and we began looking forward to Sunday’s final between Judd and his childhood idol, Ronnie the Rocket.

The time was now past 11PM, and we were on the look-out for a late night snack. At first we tried the casino next door, but there was quite a queue to get in. Even the hotel restaurant was closed, but the hotel reception offered to make us a few pizzas, which we ordered and then went to our room. The wife went down to get them 20 minutes later – and returned with the pizzas in an autographed pizza box. As it turned out, she had met Neil Robertson in the reception when he went to checkout following his defeat to Trump, and my wife not having brought a paper or a programme, he signed the pizzabox.

Sunday arrived – jud(d)gment day! We had a decent English breakfast at the hotels – a few tables away from Ronnie and his entourage, who had occupied a corner sofa, and looked like they were having a lot of fun. Very relaxed and merry.

We did not have VIP tickets for the final itself, so we tried the food in the regular bar area. It was quite OK, with freshly made pizzas, chili dogs, sandwiches etc. at fairly cheap prices. The standard beer in the venue was our own local Carlsberg.

For the first session of the final we sat on the fifth row in the middle, just between the players, and in the second session we sat about the same places but on the 3rd row. These were good seats and at a much lower price than the day before. And it was easier to watch the TV-screens, as we had a somewhat better angle than on the first row, so we did not have to strain our necks as much. The atmosphere once again was amazing, and Trump and Ronnie played some of their absolute best. During the first session we could hear the occassional football chant in the background – Coventry City FC played a home game on the stadium just next to Jaguar Hall. Somehow they managed to do something about the noise (possibly Coventry City were losing), so it wasn’t a major issue.

In the break between the first and second sessions we went down to the casino and had a rather bad burger and chili. However, we did win £15 at the slots, so all in all we had a decent time there.

The great atmosphere continued in the evening, and as you may know, Ronnie became Champion of Champions for the second year in a row, beating Trump 10-7. The crowd were ecstatic. Trump sang Ronnie’s praises, and remarked that he does not hope O’Sullivan stops any time soon, as he (Trump) still want to learn some more tricks from the legend. Ronnie repaid the kind words by commending Trump’s efforts, and also said that he was feeling very comfortable with the game – and that he was finally playing as well as he thought he did when he was 15! Ronnie then received the trophy, which he paraded around in the hall, putting it on top of his head, sending hand signs to the audience and just having a good time before the party ended and he had to join Jill in the TV studio.

Unfortunately he left the hall so quickly, that there was no time for autographs. We couldn’t have that, of course. My wife had brought “Running” all the way from Copenhagen, and it needed a signature. So we waited outside the hall – standing next to the later-to-be-slightly-famous Snooker Goths – and watched as several of the dignitaries left the arena with their trolleys, equipment, etc. We had a short chat with ref Brendan Moore and pundit (and player) Alan McManus. After 45 minutes Paul Collier came out – smiling (which is not how we are used to seeing him when he is ref’ing) – and told us that Ronnie was on his way as well.

And then he arrived – taking his time to greet the small but enthusiastic “crowd”. He was smiling and relaxed and accompanied by a massive bodyguard. He gave out some autographs, joked with the fans and allowed some photos to be taken, and it was clear that it was the time of their life for several of the fans. Around 11PM he too left the arena.

On the Monday we had a relaxing morning in our hotel (we stayed at the nearby Novotel for the last night), before leaving for Coventry itself. Coventry was heavily bombed during World War Two, and is not considered to be particularly pretty today. The new cathedral, however – just next to the ruins of the old one – is an international celebrity, and a symbol for all the cities that were bombed during the war. We also found a few good pubs, some decent food and did a bit of shopping – the city is fairly inexpensive, but no way near being an architectural pearl.

At 6PM we were back in the airport, and after half an hour in one of the lounges we flew back home to Denmark. It had been a great trip. The final between Ronnie and Judd was one of the best snooker matches we have ever seen – which is a lot. The atmosphere was amazing, and despite its location well outside the city centre, Ricoh Arena and the associated hotel and casino was quite suitable for an event like this.

We are sure to go back to the Champion of Champions some time, and we can thoroughly recommend that you do so too.