The 2018 World Snooker Championship will once again be played in the Snooker capital of the world, Sheffield. This will be the 41st time in a row that the championship will be played in the legendary Crucible Theatre. The 16 top players in the world will play against 16 qualifiers, who have to go through an arduous qualification tournament. Everything leads forward to the climax, the final, which will be played over two days and which may take incredible 35 frames to be decided. The box office will open on Monday, May 1, 2016 at 9 AM (UK time, GMT+1). Tickets, especially for the final sessions, will sell out in a matter of minutes, so be ready at 9AM sharp! 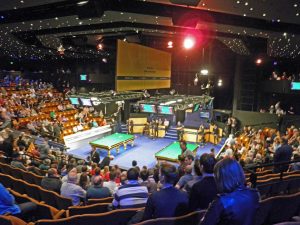 From the World Snooker Championship 2013

Tickets for the World Snooker Championship 2018 – and where to get them?

Tickets will be put on sale on Monday, May 1 at 9AM (UK time, GMT+1). Tickets for the final will sell out very quickly!

In 2017 a standard ticket for a 1st round session cost £20, while a ticket for the 4th session of the final was £80. All-day tickets are generally not aailable.

There are a number of good hotels in Sheffield close to the Crucible Theatre. Recommended options are the 4-starred Novotel and Mercure, both of them very close to the Crucible, and both of them used by World Snooker. In 2015, finalist Stuart Bingham praised the Mercure for their hospitality during the tournament. Budget travelers are recommended to try the nearby Premier Inn, which is usually good value for money. Other Sheffield hotels are available here.

Going to Sheffield for the World Snooker Championship 2018

There are good flight connections to most of Europe as well as overseas to/from Manchester Airport and Birmingham Airport, both of which are about 1½ hrs by train from Sheffield. Tickets from the airports to Sheffield can be had from around £10 for a single if you book your ticket in advance. If you do not, you may have to pay up to around £30. Train tickets can be purchased in advance from www.tpexpress.co.uk.

For some, flying in to the Doncaster Sheffield Robin Hood Airport might be an option, but this is mostly a possibility for Eastern European travelers flying Wizz Air.