The 25th Welsh Open in Snooker is once again held at the Motorpoint Arena in Cardiff. Defending champion is the four time winner of the World Championship, John Higgins, who defeated Ben Woollaston 9-3 in the 2015 final. 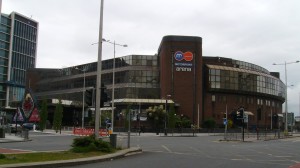 The tournament will be played in the centrally located Motorpoint Area, a short walk from Cardiff’s central train station. The Arena itself was opened in 1993, and has hosted many major events, including the 2015 Welsh Open in Snooker, the 1999 World Professional Pool Championship as well as concerts by Elton John, Lady Gaga and Iron Maiden. There is also a large number of shops, hotels and pubs nearby.

Tickets for Welsh Open 2016 are available from World Snooker – at the time of writing (August 5, 2015), tickets are still available for all sessions. Standard tickets prices begin at £12 for an all-day ticket for Rounds 1-3, going up to £45 for an all-day ticket for the Sunday final. For a limited time only, tickets for rounds 1-3 sell at half price, subject to availability.

The Radisson Park Inn hotel is just across from the tournament venue and is a decent tourist class hotel. A minute further away is the four star Radisson Blu. If price is of the essence, there is also an Ibis hotel nearby.

How to get to Cardiff?

It is possible to fly directly to Cardiff Airport from several European destinations, including Amsterdam, Dublin, Dusseldorf, Milan, Munich and Paris. Another easy option is to fly to the larger Bristol Airport (from fx Berlin, Copenhagen, Madrid and Warsaw), and then take a bus from there. A Greyhound UK coach from Bristol Airport to Cardiff is about 1h 40m and costs approx £10 if booked in advance. No visa is necessary for visitors from the EU, but you will need to go through passport control, as the UK is not part of the Schengen area.