A visit to the Irish Legends Cup 2017 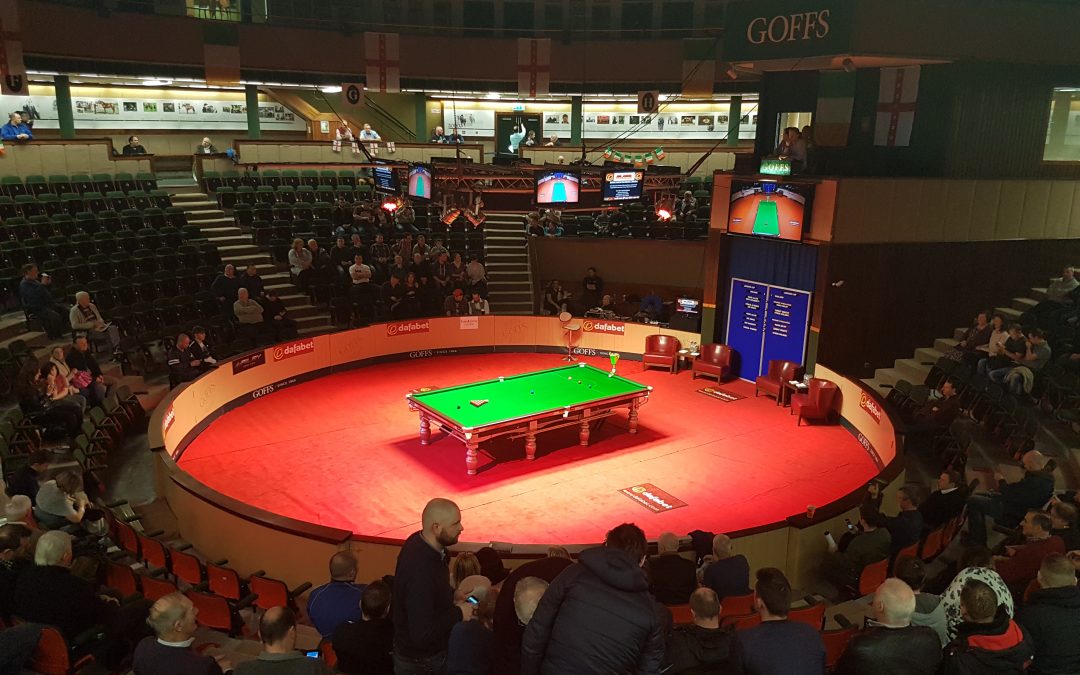 A short intro to the tournament: Irish Legends Cup is a tournament that is organised by Snooker Legends, a private company managed by Jason Francis. Since 2009, Snooker Legends has organised show matches and mini-tournaments featuring some of the greatest names in snooker. Ronnie O’Sullivan has been in it a lot, and the refs Jan Verhaas and Michaela Tabb have also been frequently used. The same goes for legends Dennis Taylor, Willie Thorne and John Virgo, who often appear as MCs and commentators.

The Irish Legends Cup itself is a team tournament, in which an English team plays an Irish team over the course of two days. The matches are a mix of doubles and singles – a bit like the Ryder Cup in golf. For this tournament, the English team consisted of Ronnie O’Sullivan, Mark Selby, Kyren Wilson and team captain Jimmy White. The Irish team was Joe Swail, Mark Allen, Ken Doherty and team captain Fergal O’Brien. The refs were Verhaas and Michaela, and to guide us through it all we had Dennis Taylor (known for his amazing victory on the last black in the World Championship final against Steve Davis in 1985) and John Virgo (former top player, also known for his trick shots and his long stint as a commentator on BBC).

The tournament took place on Saturday and Sunday, January 7-8 at Goffs, a world-known centre for bloodstock sales located around 40 km to the SW of Dublin.

We only had tickets for the Sunday matches. VIP tickets for the 1st session and Premium tickets for the 2nd session in the evening. We flew into Dublin on Friday evening, and we had spent our Saturday in Dublin before taking a bus out to the town of Naas in the late afternoon. At 11:30 on the Sunday morning we got a taxi from our hotel, Lawlors in Naas, to Goffs, where we arrived around 11:45.

Goffs is a bit of a distance away from everything, although it isn’t more than a 10-15 minutes drive from the hotel. The place itself is quite impressive, with a beautifully laid out entrance with a fountain, horse sculptures etc. Not quite what we’re used to from the other snooker trips we’ve been on.

We were welcomed on arrival and received our passes, and we had a time for a small drink before the reception started. There was also a merchandise stall that offered signed photos, books about Jimmy White and Snooker Legends, cues, balls, posters etc.

At 12 o’clock we were let in to the reception, which took place on the 1st-floor balcony. I guess there were around 40 visitors with VIP access. We were offered a glass of bubbly, and Jason told us how it would be done: Players, refs and commentators would come in and sit down at a long table. We could then queue up and have everything that we wanted signed by them. Afterwards, the celebrities would go out and mingle and take selfies with us. Yes, please. First, the missus asked Ronnie to sign her copy of his crime thriller, Framed. We then had Jimmy White sign the forewords (written by him) to the Snooker Legends books, and we got a signature in the programme from everyone else.

At last, we asked Jason Francis to sign the Legends book himself – he obviously wasn’t used to that sort of request and seemed slightly confused that we wanted HIS autograph, but we thought, that as he is the man behind it all, well… So, he had to ask Selby for a pen to sign it, while the Jester stood grinning behind him. We then said hi and had our pictures taken with a couple of legends or 5, and we now have photos of us together with Ronnie O’Sullivan, Ken Doherty, Dennis Taylor, Jimmy White and Michaela Tabb. We had met a few of the others at earlier events.

At 12:45 the reception was over, and the players went down to ready themselves for the third session of the Irish Legends Cup 2017 – meanwhile, the audience found their seats. For the first session of the day, we were seated on the second row at the baulk end of the table, right down where the players and the MC were seated/standing during the matches. This is obviously in contrast to regular tournaments, where the players are seated with their backs to the audience. But excellent seats it was. The venue itself was also really good and well-suited for this kind of events. The snooker table was placed in the pitch that is normally used to show off the bloodstock horses, and there is almost a full circle of seats around it. This gives it an intimate atmosphere, where everybody has a good view of things and you feel really close to the action. During play, several of the players (and their wives) who were not playing, were standing on a balcony at the end of the room and followed the events.

For the introduction, Englishman John Virgo and Irishman Dennis Taylor presented the English and the Irish teams respectively. John Virgo did a pretty traditional introduction, while ever silly Dennis Taylor did a small Irish jig with his players, as they came down the stairs. Ken Doherty even had his young son run down in front of him with an Irish flag as a cape. Great atmosphere it was. Each player received a well-deserved applause, and after 5-7 minutes it was time to begin playing.

Each match at the Irish Legends Cup 2017 consisted of just 1 frame, and the tournament was best of 35 frames. 12 frames had been played on the Saturday, and England was in the lead by 7-5, so there was still a lot of action left for the Sunday game.

The first two frames were doubles. Two vs. two, with the players switching between each break. This made for an interesting game dynamic, and it was nice to see the players cheer each other on and getting involved in the cue action of their teammate. You’re not used to seeing this in an individual sport like snooker. Four singles followed. One of them was Mark Allen vs. Ronnie O’Sullivan. Ronnie made a break of 72 with 75 left on the table. Allen went it and cleared it all up to win the point with 73-72, and the local crowd was naturally ecstatic. By the end of the third session, however, the score was 11-7 with England still in the lead.

The afternoon session was all over at around 4:40 PM, so we had just over an hour to get some food before the start of the fourth session at 6 PM. The food at the venue was really nothing to write home about. Some hot dogs, chicken curry or something like that in the on-site café. Unfortunately, we didn’t have enough time to visit the Dew Drop gastropub in nearby Kill, which we had heard good things about.

At 6 PM we were back in the arena, now seated on the front row and a block closer to the middle. And as opposed to the earlier session, it was now a full house, and the atmosphere was sizzling. We had eight singles to look forward to. As a result of the format, where the team captains chose the playing order of their own players without knowing that of the opponent, Allen and O’Sullivan played each other once more, this time with a victory for the Rocket after a quite decent 116 break.

Dennis Taylor and John Virgo took turns, commenting 2 frames each, and it was brilliant entertainment. You may get a bit tired of Virgo’s endless “Where’s the cue-ball going?” each and every time the white ball goes just a bit close to one of the pockets, but then again, it is his trademark…

After the eight singles in the fourth session, the score was 16-10 with England still ahead and just 2 points away from victory. The last (potential) 8 points were to be played as re-spot black, i.e. with black as the only ball on the table, and with the first player to pot it taking home the point. The Irishmen showed their fighting spirit, and they did get a few points on the scoreboard, but then Ronnie and Selby took the two points that England needed to win the frames and the match. Final score: 18-13 to England, and the team captain, Jimmy White, received the trophy from the UK ambassador to Ireland, who was also in attendance.

We stayed around at Goffs for about 15-20 minutes after the of the event, enjoying a drink and the remains of the atmosphere, and then called a cab to take us back to the hotel, where we arrived at 10:30 PM.

All in all, Snooker Irish Legends Cup 2017 was a really well organised and entertaining event. The atmosphere was great, and it was fun to see the players as part of a team. The facilities were among the best we have encountered at any snooker tournament, and naturally, it was a bit of highlight to meet the players at the reception before the match.

You can read more about Snooker Legends here. If you have any questions for us at snookertrips.com, you are welcome to leave a comment below, and we will reply as soon as possible. We’re also happy to assist you with ideas and info on how to go to various snooker tournaments. We have travelled to several of them ourselves, over the past five years.