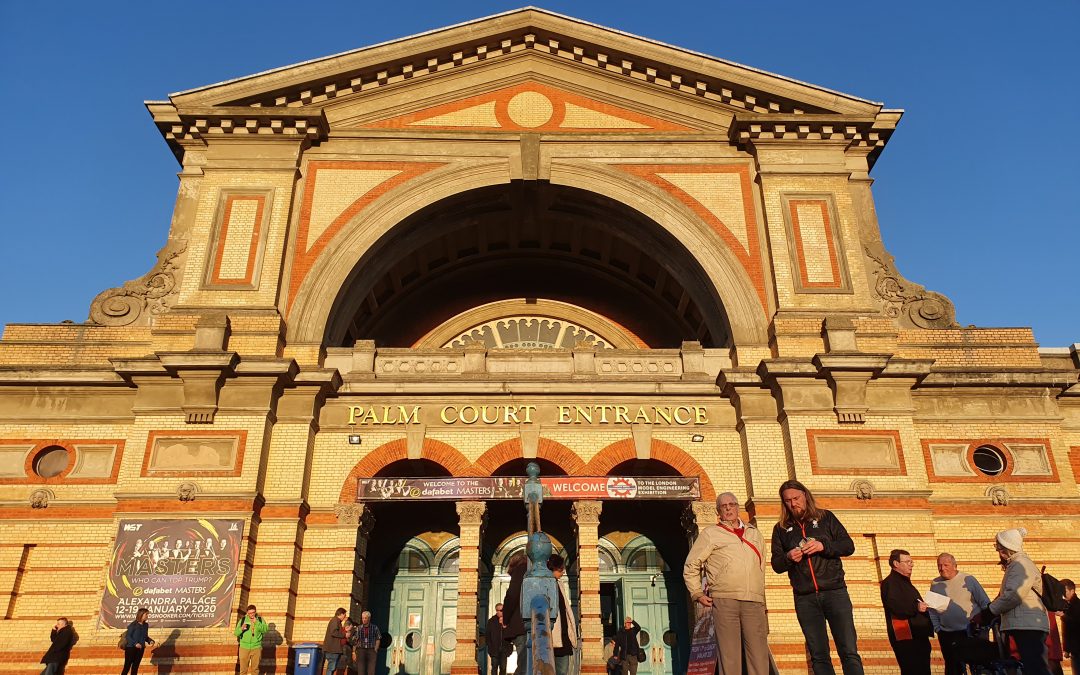 The Masters is one of the Triple Crown tournaments of snooker – as such it might be compared to a tennis Grand Slam or a golf Major. It is the only one of the Triple Crown tournaments that do not give any ranking points, but the winner will receive an impressive £250,000. Even so, it is guaranteed to be world-class, as only the 16 best players in the world are invited, and it is also one of the biggest venues on the snooker tour with a crowd of around 2,000 in attendance for most sessions.

Where will The Masters 2024 be played?

The tournament will be played in “Ally Pally” – Alexandra Palace – which was built way back in 1873. The “palace” is located in green surroundings in the northern parts of London between Wood Green and Muswell Hill, and it features one of the best views of London’s skyline in the distance. The nearest tube station (20-25 min. walk) is Wood Green, from where it is a 20-minute ride on the Picadilly line to the very center of London (Covent Garden, Picadilly Circus). A bit closer – about 10 minutes walking distance – is the Alexandra Palace Rail station, with frequent connections to Kings Cross St. Pancras. There are also frequent bus services going up to Alexandra Palace all through the day from the Finsbury Park and Wood Green tube stations.

When will The Masters 2024 be played?

The snooker Masters 2024 will take place from January 7 to January 14, 2024. Although the exact programme has not yet been published, the first-round matches are probably being played one at a time (ie. no simultaneous matches) from January 7 to 10, with one match at 1 PM and one match at 7 PM local (UK) time. The four quarterfinals will probably be played on January 11 and 12, with the semifinals taking place on the 13th and the grand final itself on January 14, 2024. All matches up until and including the semifinals are usually being played as best of 11, while the final itself is best of 19, with 8 frames being played in the first session and up to 11 frames in the last session.

Prices for the 2024 Masters range £30 for an afternoon session in the first round up to £60-70 per session for the semis and the final. All-day tickets are available from £50 (1st round, Monday to Wednesday) up to £125for the final. There is a 25% opening offer for standard tickets for the Monday – Wednesday sessions available until further notice.

Premium tickets are available at a price of £75-115 per session, which include seating in the front five rows as well as a complimentary earpiece (commentary radio) and programme. However, if you want the truly exclusive and luxurious experience, go for the VIP Booth (£265-425 / session) or Century Club (£325-495 / session) tickets. These include food and drinks and exclusive seating, either in comfortable sofas at the baulk end of the table (the VIP Booth tickets), or in the sound-proofed Century Club lounge with its own bar and a bird’s eye view of the table. These luxury tickets also include other benefits such as the possibility of a meet and greet with a snooker legend, VIP parking spaces etc., but they will cost you. A Century Club ticket for the evening session of the final will set you back £495, while luxury tickets for other sessions are slightly less expensive.

See further ticket details and book yours today at this link: https://wst.tv/tickets/2024-masters-snooker/

There are some smaller hotels – basically Bed and Breakfasts – within 1-2 miles of Alexandra Palace. If you want something bigger and better, the best option is probably to find a hotel near the city center close to the Picadilly tube line or in the Kings Cross/St Pancras area of London with direct rail connections to Alexandra Park Rail Station. For an upscale experience near Kings Cross, try the 16-storey Pullman St Pancras with impressive views of London or the luxurious St Pancras Renaissance Hotel, which is virtually located in the Victorian station building station itself.

Another option could be one of the many hotels of all types near Russell Square. Russell Square is close to a lot of London’s major sights and museums but is also well connected with buses and the tube station Russell Square, from where there is a direct connection to Wood Green near Alexandra Palace. A charming 5-star hotel could be the recently renovated Russell Hotel (now known as The Principal), but there are a lot of hotels – also cheap ones – to choose from near Russell Square. Hotel rooms in this area start at about £70/night for a single room, while a suite in one of the better hotels can cost you several hundred pounds a night. You can book your London hotel at booking.com.

Few cities in the world are as well-connected plane-wise as London. Pretty much all major airlines in the world have scheduled and frequent flights to one of London’s five airports (Heathrow, Gatwick, Stanstead, Luton, and London City Airport).

From Heathrow, the Picadilly tube line takes you directly to the city center in an hour, and it continues on to Wood Green near Alexandra Palace. It is also possible (and more expensive) to board the Heathrow Express which arrives at Paddington Station in 15 minutes and is a lot more comfortable than the tube.

From Stanstead, the Stanstead Express will take you to Liverpool Street Station in ca. 45 minutes, or you can stop at Tottenham Hale and take the tube onwards to Kings Cross for a total transport time of around 50 minutes. Busses are also available.