Riga Open is being played for the third time in 2016 and is also the first ranking tournament in the 2016/17 season. Once again it brings world class snooker to Latvia’s beautiful capital Riga, which is easy to reach by air from most European capitals and other large cities. The reigning champion is Barry Hawkins, who defeated surprise finalist Tom Ford in the 2015 final by 4-1.

Where is Riga Open 2016 being played? 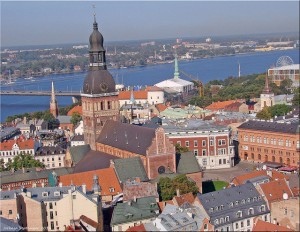 The Riga Old Town with the Cathedral in the center

The venue for Riga Open 2016 has not yet bee confirmed, but it will most likely be played once again in the Arena Riga, a couple of kilometers from the town centre. The Arena normally seats up to 12,500 people and is used for ice hockey, basketball and major concerts. The city of Riga itself is a beautiful, dynamic and interesting “small” capital with a lot of history. It is visibly influenced by its position at the Baltic Sea and old status as a major trading port with a large influx of traders from the Nordic countries.

The old town by the Daugava River is quite a treasure, and the city also boasts lovely parks, beautiful buildings and a lot of shopping and entertainment options. Food and drinks are cheap but of quite a good quality, and the Latvians are generally good at English and German and are used to tourists, especially from the Nordic countries.

The tournament is being played from June 22 to June 24 with the qualifying matches being played a few weeks before in Preston, UK on June 3 and 4. The order of play has yet to be determined.

When can I get tickets – and for how much?

Tickets for the 2016 Riga Open are not yet available. For the 2015 edition of the tournament, prices went from €10 to €100. All tickets were valid of an entire day, but some of the more expensive tickets even gave VIP-status with extra good seats, access to the snooker players’ lounge and entry to a tournament after party.

Where can I stay near the tournament?

There are a lot of hotels in Riga in all prices ranges and quality levels. There are no good options just next to the Arena, which is however just a 20-25 minutes walk from the old town or a few minutes by taxi or public transport – both of which are quite cheap in Riga.

The official World Snooker designated hotel for Riga Open 2015 was Radisson Blu Hotel Latvija, and although it has not been confirmed, it is not unlikely to be the tournament hotel in 2016 as well. As such there should be a good opportunity of bumping into the players here. Be aware, that there are three other Radisson hotels in the city, but it is only the Latvija, which was affiliated with the tournament. It is recommended to find a hotel near the Esplanade park, which is just outside the Old Town in the direction of the Arena. It is a nice and open green area within walking distance of pretty much everything in the city. Other hotels in Riga can be found on booking.com.

How do I get to Riga?

Riga Airport is located just a bit to the South West of the the city. It is quite modern with a lot of international connections, especially to Northern and Eastern Europe destinations. Main providers are airBaltic and the discount airlines Norwegian, Ryanair and Wizz Air.

A bus to the city centre from the airport takes about half an hour and costs €2. It is also possible to get a taxi, which will take you about 15 minutes and cost €15. Transportation in Riga is generally fairly cheap.

The photo of the Riga Old Town is released under an Attribution-NoDerivs 2.0 Generic (CC BY-ND 2.0) license by it’s author Jorbasa Fotografie.